The Ultimate Guide to Reinebringen Hike in the Lofoten Islands, Norway Reinebringen, the most popular and iconic hike in the Lofoten islands with its stunning views of the villages of Reine, Hamnoy and Sakrisoy is one of the must-do hikes in Norway. During the peak season, it is a very popular hike thanks to widely shared pictures on social media. The previous path was very steep, muddy and dangerous and the trek was closed by the local authorities but in summer 2019 the new stairs path is completed which is built by the Nepali sherpas at a cost of 7million Norwegian kroner and provide easy access to the summit. The path is easily accessed from Reine and during the summer season, 800-1000 people hike every day.

There is still a risk of rock falling so keep an eye on the trek. Due to its popularity, I would advise starting very early to avoid the crowds or go late in the afternoon, during the summer there is almost 24 hours of sunlight.

​The starting point of the hike is after the Ramsvik Tunnel coming from Reine on E10 along the old road. Since the stairs are completed, this has become more popular among the visitors and it is hard to find parking near the trailhead. The closest and the free parking is at Djupfjord viewpoint which is around 1.3km from the trailhead after the tunnel. The second option is to park in Reine village at the Ytre Havn.

It is strictly forbidden to stop or park along the road and very dangerous especially before or after the tunnel.

How to Use This Map: Click the Tab on the Upper left corner of the map to view all places of interest marked in the map. You can show or hide the places by check/uncheck marks. By clicking on the Star in the upper corner next to the name of the map, you can add this map into your Google maps to view it on mobile or computer. It will be saved under "Your Places" under the Menu.​

Without a doubt, ​Summer is the best time to do the Reinebringen hike. It is a very pleasant trek since the completion of the new path. There are almost 1560 steps and you have to follow these steps all the way. Only the last 50 m below the summit are not stairs so follow the old trail. The upper section of the trail is prone to rockfalls mostly caused by the hikers at the summit especially on a crowded summer day.

I would advise to go early in the morning or late in the afternoon for the midnight sun. We wanted to see the midnight sun from the summit, and at around 11 pm, we had the summit to ourself, only a few hikers in their tents. 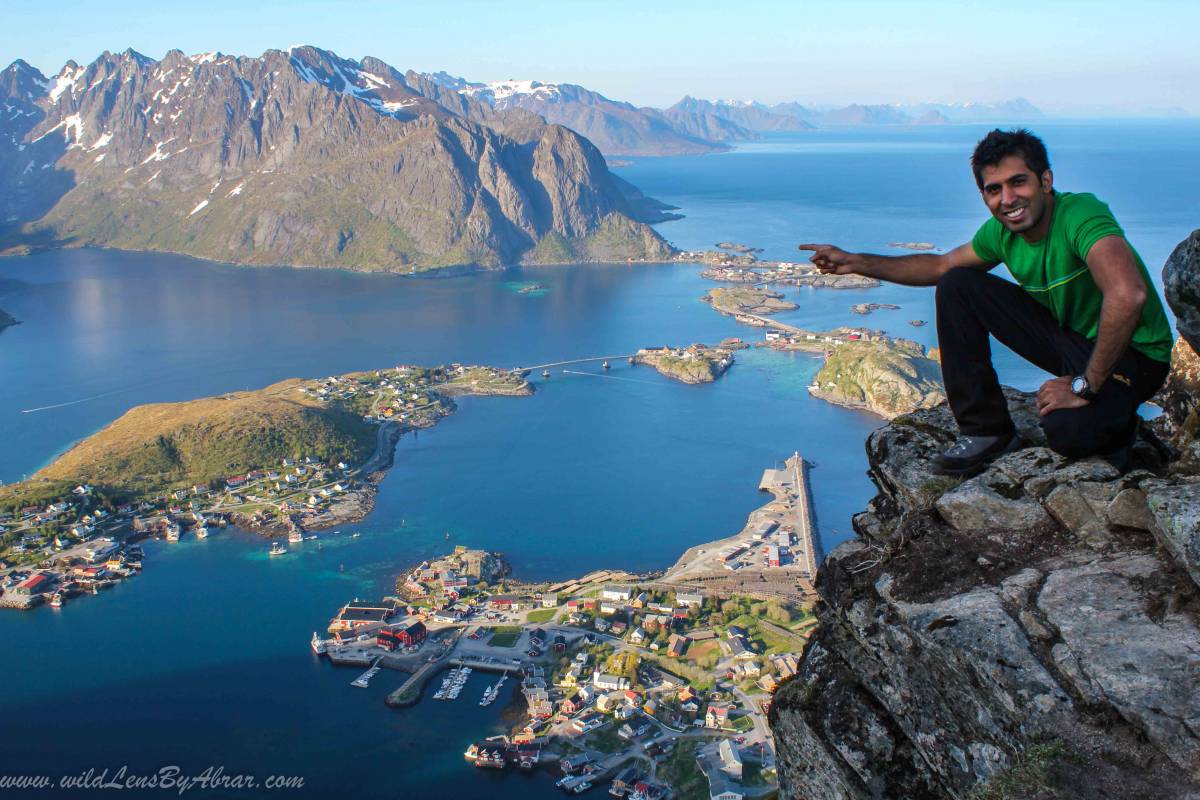 Views of Reine, Hamnoy and Sakrivoy from the Summit of Reinebringen

​During the winter season, the trek is completely covered with snow and the stairs are often hidden under it. We did the trek in March and it was all covered with not only snow but also the stairs were covered with ice. Some sections of the trail were very steep and dangerous. From my personal experience, I would highly recommend wearing crampons. The weather here changes quickly so you should be fully prepared before going up. It can take up to 3 hours during the winter season to climb.

Reinebringen hike in Winter is hard and steep

There are probably 5-8 places for 1-2 person tent at the top with stunning vistas of the surrounding mountains. All of these places are on the exposed ridge so you should be aware of the weather conditions.

There is no water at the top, so bring water for cooking and drinking. During the summer season, there will be few other hikers fighting for the best spot, so it's better to be there early to find a proper place to pitch your tent.

How to Hike to Iconic Segla and Hesten Mountain in Senja in Summer and Winter, Northern Norway

Saksun the Fairytale Village and Saksun to Tjornuvík Hike

5 Stunning Fishing Villages Not To Be Missed in Lofoten Islands, Norway

Aslamalikim bhai your u.tube channel and blog are professional I like you very much your style and you are very humble personAllah protect you please take specially hiking snow mountains thanks

1 Cancel Reply
Aslamalikim bhai your u.tube channel and blog are professional I like you very much your style and you are very humble personAllah protect you please take specially hiking snow mountains thanks
Cancel Update Comment